The Gondwana forests of Barrington Tops are well-known for their extraordinary endurance, a relic of the Earth’s primordial history that earned the region UNESCO’s World Heritage status in 1994.

These ancient deep forests continue to hold close their secrets; here are just a few examples of the extraordinary nature that abounds here.

As a starting point, can I ask: Do you feel kind of special walking through beautiful forests? The Japanese have a word for it: shinrin-yoku, which means forest bathing, or taking in the forest through your senses. Try it in Barrington Tops for a touch of Gondwana rainforest bathing, read more about it here.

Now let's get back to the others in our list extraordinary nature:

That's not all folks!

These amazing animals became iconic thanks to Bugs Bunny but on a serious note... they're under threat from facial tumour disease.

The Tasmanian devil is the world’s largest surviving marsupial carnivore and was once found on the mainland of Australia, but now only found in Tasmania. The devil became extinct on the mainland some 3,000 years ago – before European settlement, due to being hunted by the dingo which itself is an introduced species. Devils are now only found in Tasmania, safe from dingoes, and is the island state’s top predator.

Devil Facial Tumour Disease (DFTD) is an infectious cancer that only affects Tasmanian devils. DFTD is transmitted through biting, fighting and mating and is one of the only cancers known to spread like a contagious disease.

Aussie Ark is a conservation facility hidden high in Barrington Tops where the environment is similar to Tasmania. Built off the success of Devil Ark, this is Australia’s largest mainland breeding facility for the Tasmanian devil, free from DFTD. The Tasmanian devil is likely to disappear forever if the disease spreads and population decline trends continue. A robust insurance population is the only guarantee for the long-term survival of the species. Without Aussie Ark, the Tasmanian devil stands to disappear, forever.

Book a tour at Aussie Ark to see their amazing conservancy work for yourself.

A lizard without a bad haircut.

No, a land mullet is not a 1970s footballer or rock’n roller lost in the rainforest, it’s a giant skink.

Previously known as ‘Egernia major’ but now reclassified into the new genus Bellatoria, these scaled reptiles are only found in the rainforests of south eastern Australia.

Large adults can reach a total length of up to 60 cm. Their black-brown scales assist with rapid body warming & the restricted sunlight of the rainforest requires a number of basking sites to be available.

Accordingly, they remain in close proximity to them… rather like the fans of those famous 1970s mullet-wearers Warwick Capper and Rod Stewart.

The large moss-covered fallen logs you see in Barrington Tops are perfect habitat for land mullets. They shelter in the hollows or in burrows dug into the soil-bound root systems of these fallen trees.

Land mullets are normally reported to be very shy, dashing noisily to the cover of dense low vegetation if disturbed. However, in some popular National Parks, the lizards have become habituated – scavenging close to humans for scraps at picnic and camping sites.

Land mullets do not hatch their young from eggs, instead they bear live young with 4 to 9 independent offspring per litter.

A cure for cancer?

Trametes versicolor is a bracket fungus found in a variety of habitats in Barrington Tops, known as Rainbow Fungus, Rainbow Bracket or Turkey Tails.

This common wood-decaying fungus is medically significant, being a natural source of the anti-cancer polysaccharide PSK, and is used as a cancer adjunct therapy for the immune system. There’s sure to be a cure for cancer hidden in our Barrington Tops rainforests.

The Eastern stony creek frog (Litoria wilcoxii) is found in Barrington Tops and the males turn a bright yellow to yellow-orange during mating season. And instead of croaks, males call with a very soft purring.

The species is threatened by habitat loss especially spawning areas, so take care around our waterways and watch out for the purring frog seducing its partner with a costume change.

Litoria wilcoxii shows extreme sexual dimorphism, meaning the males & females have different appearances. Females can reach a length of up to 70 mm and males 45 mm. Females are a smooth brown in colour with speckling and blotching in the groin. A thick black stripe extends from the nostril to the base of the forearm, encompassing the eye and tympanum. The lower underside and groin can be from a light yellow to olive green, tending more often towards a beige brown.

Males however turn a bright yellow to yellow-orange during mating season. They will call to the females with a very soft purring from debris such as rocks, vegetation or the ground immediately next to the water body.

Who’s a pretty boy then!

OK, they're very common in the Barrington Coast but aren't they just beautiful? When US personality Johnny Carson said “When turkeys mate they think of swans”, he didn’t know about Australian brush turkeys. Because who needs a swan when you’re a dazzling redhead with a golden necklace?

The Australian brush turkey, also known as bush or scrub turkey, can be found in rainforests along eastern NSW. With a striking red head, gold necklace, blue-black plumage and booming call, these distinctive Australian birds are easy to spot while bird watching in Barrington Tops.

The native Australian brush turkey is found in rainforest and adjacent eucalypt forests throughout NSW. It has a distinctive lobe that hangs from the base of its neck, deep blue-black plumage, bright head colours, and a general ‘turkey-like’ appearance.

You might spot a brush turkey foraging on the forest floor for seeds, fruits and small insects. If you’re lucky, you might hear the male’s booming call echoing through the bush.

When breeding, the male brush turkey builds a large mound of leaf litter in which the female lays her eggs. The decomposing vegetation gives off heat which helps incubate the eggs. Upon hatching, the chicks dig their way out through the layers.

The masters of musical mimicry: birds, hammers and chainsaws.

The Firs is an unusual picnic area high in Barrington Tops surrounded by old Douglas firs… a type of pine tree. You’ll think you’re in Vancouver until you realise the dozen different bird calls (and even the motorcycle sound) are all coming from that lovely lyrebird perched on a log in the cool deep shadows. He’s singing to attract his mate, if you’re quiet you may see her sidle up to hear his performance. Very Australian.

Did you know that male lyrebirds don’t have a call of their own, instead they are experts at mimicry. It’s not unusual for an individual to have mastered the calls of up to 25 birds which it can join together in a song to attract a mate… now that’s a handy skill!

The lyrebird that inhabits the eerie forest at The Firs Picnic Area in Barrington Tops is known for his motorcycle mimicry but to hear some truly extraordinary mimicry, check out the construction sounds of the lyrebird at Adelaide Zoo.

Yes, moss... because without oxygen from ancient moss you wouldn’t be alive today.

The Earth’s air is only breathable today because of moss-like plants that colonised the land 470 million years ago. And the mosses of Barrington Tops are a living link back to that life-sustaining event.

The moss enriched the atmosphere with oxygen and triggered a cycle that maintained its levels, paving the way to complex life.

Oxygen in its current form first appeared on Earth 2.4 billion years ago in what has become known as the Great Oxidation Event.

But it was not until around 400 million years ago that oxygen in the atmosphere approached present day levels. Scientists have long debated what caused this shift, without which humans could not have evolved.

A team from the University of Exeter used computer simulations to show how the first land plants contributed to the Earth’s oxygen.

The earliest terrestrial plants were simple bryophytes, such as moss, which lack vein-like systems to transport water and minerals.

Factoring the properties of modern bryophytes into the simulations indicated that thanks to the ancient mosses, modern levels of atmospheric oxygen would have been achieved by 420 to 400 million years ago.

The emergence of the plants eventually led to a stable and self-sustaining cycle of oxygen flowing between sedimentary rocks, living things and the atmosphere.

Today, the air we breathe consists of of 78 per cent nitrogen and 21 per cent oxygen, with smaller amounts of argon, carbon dioxide, water vapour and trace gases.

As well as making the air breathable, oxygen generates the ozone layer that protects life on Earth from the harmful effects of ultraviolet radiation from the sun.

“It’s exciting to think that without the evolution of the humble moss, none of us would be here today,” said lead scientist Tim Lenton, from the University of Exeter.

“Our research suggests that the earliest land plants were surprisingly productive and caused a major rise in the oxygen content of the Earth’s atmosphere.”

It’s true that there are no longer any dinosaurs to actually see in Barrington Tops (we missed that by quite a few million years!) but the remnant Gondwana landscapes you’ll find here will easily conjure up an era long past. So do you fancy a walk with some dinosaur ghosts?

Is that a meat-eating Australovenator (“Southern Hunter”) waiting for you beyond those tree fern?

The landscapes of Barrington Tops are ancient Gondwana, where dinosaurs roamed from the Cretaceous period 65-146 million years ago. Stroll through tree fern groves past huge moss-covered logs, cascades and 1000-year old Antarctic beech trees. You’ll soon feel like you’re in dinosaur country. (Wait…. what was that sound?) 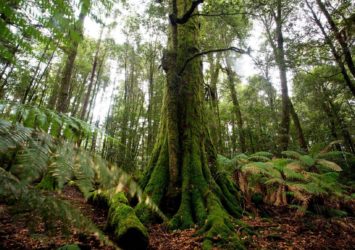 Walk with dinosaur ghosts on this easy walk in Barrington Tops. 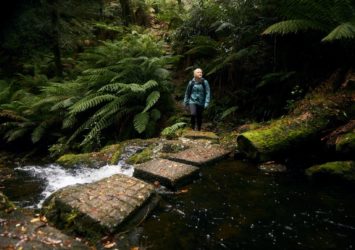 A challenging walk along the Williams River with a spectacular reward. 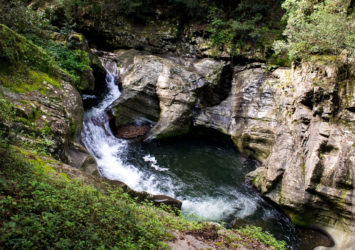 An easy walk along the Williams River in the southern precinct of Barrington Tops. 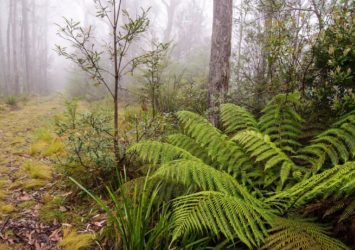 From Gloucester Tops to Careys Peak. 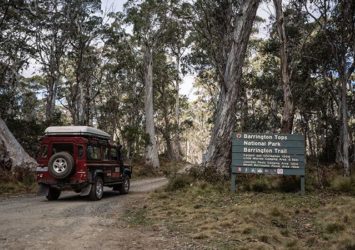 Take the challenge of the Barrington trail, a 4WD trail in Barrington Tops National Park. Open between October and May every year, plan your 4WD camping holiday now. 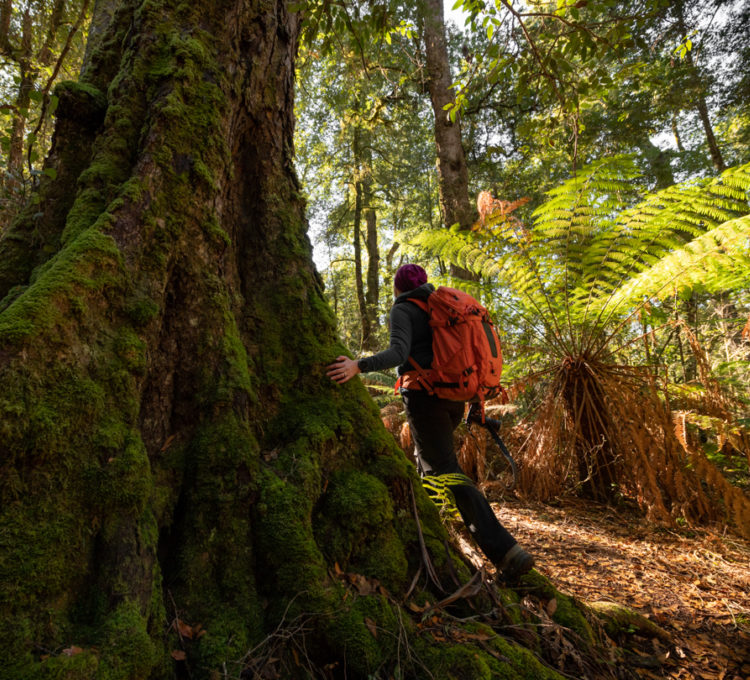 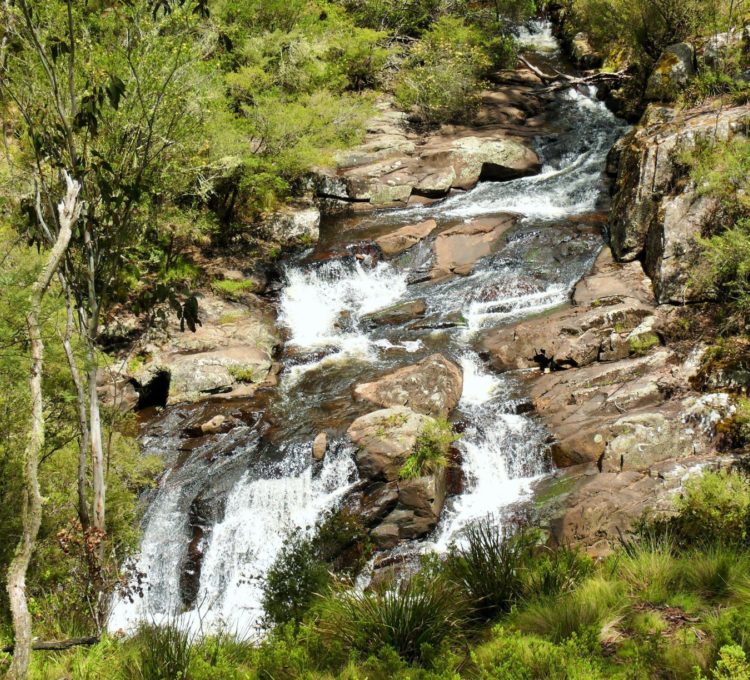 Where to find the best walks in Barrington Tops 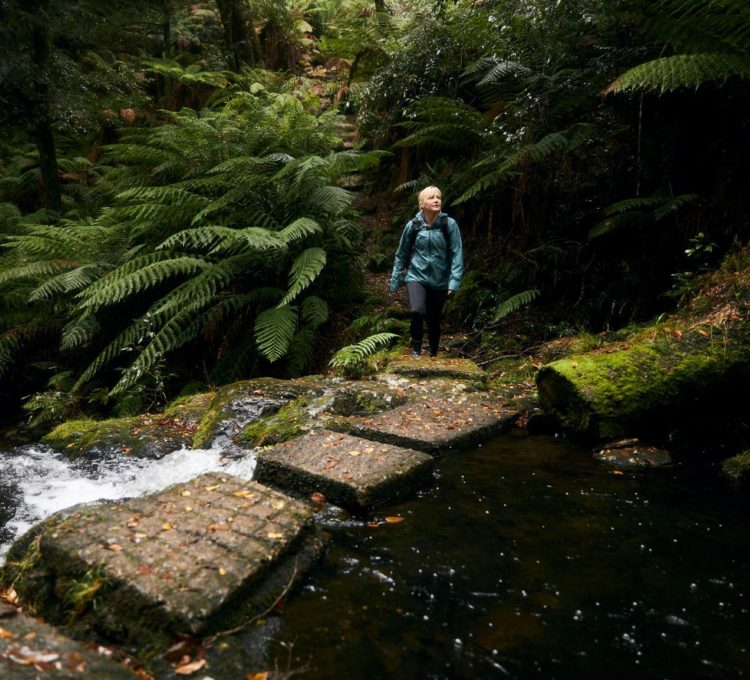 Gloucester Tops Circuit - one of the top 5 walks

Catherine Boyd's guide to the Gondwana rainforests of Barrington Tops 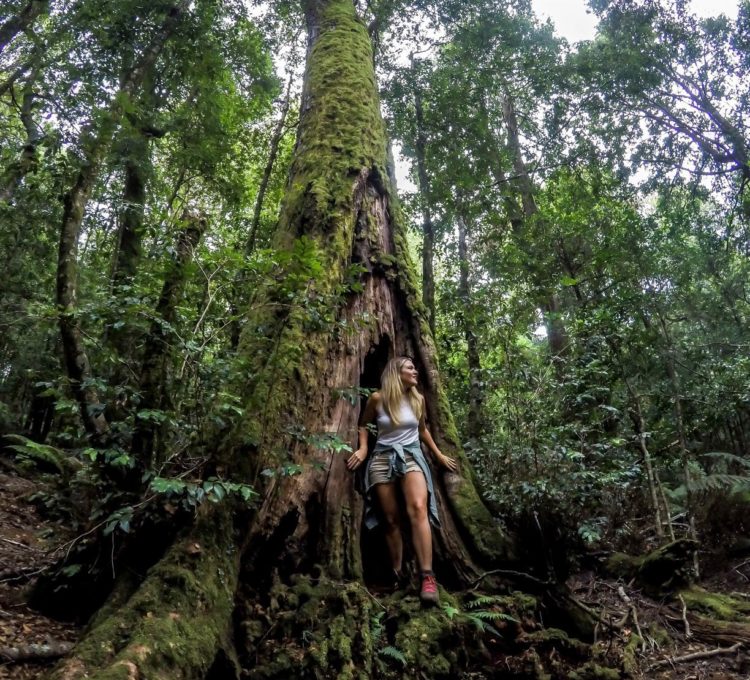