If you love uncrowded music festivals where you can relax, interact with the locals and dance like no one’s watching then the third weekend in October will answer your dreams with the Wingham Akoostik Music Festival.

I have loved attending music festivals ever since our first taste of Byron Bay Blues Fest about 20 years ago. My husband Kevin and I were really inspired after attending an APRA workshop in Byron with festival founder Peter Noble, we wanted to create our own festival scene right here at home. To our delight two business owners in Wingham were thinking the same thing. So we collaborated with Marcia Bourke (Ashlea Road Boutique) and Janeece Irving (Wild Fig Cafe) and brought in other locals with the same passion to bring music, culture, workshops and tourists to Wingham.

Our first festival was in 2007 at Wingham's Central Park, and every year since then we have been strongly committed to growing not only our audience but the sustainability and capacity of the event and our volunteer organisation that runs it.

The festival exposes new art forms & creative endeavors that might otherwise not be available to a regional audience.

The aims of the festival

The Akoostik Music Festival has really grown since relocating to the Wingham heritage showgrounds, just a short distance from the original spot in Central Park. The showgrounds have allowed people to camp on site for the weekend or longer as many have travelled to also visit local landmark destinations like Ellenborough Falls.

The festival is best described as vibrant, yet relaxed. Campers can laze in their vans and listen to the music drift across the grounds, or throw their rug under the bright flag sails and absorb every second of the music from Friday evening, all day Saturday to sunset on Sunday.

We always aim to promote our local artists, giving them the experience to play alongside the bigger names that are larger than life on stage at night… and some of our local artists have gone a long way from Wingham to Nashville!

If you love following an artist rise from being your favourite, to everyone’s favourite, this is the spot for you. We were all so excited when festival favourite Colin Lillee, originally from Scotland via the Northern Territory, played at Akoostik and then appeared on The Voice. In 2009 Smokin' Joe Robinson played to an inspired local crowd on Central Park before taking on the world, to now be regarded as a guitar virtuoso!

We’ve had many years of glorious warm sunshine for our annual event, which has been by far the majority. We also had one year of a forceful unpredicted storm that had major impact and cut the festival one day short. When this happened, our Akoostik crowds were all the more supportive as they knew they’re just as much a part of it all as we are - they know we can’t do it without them!

It is this that keeps us inspired year after year, refreshing the Festival by adding new art forms and elements to the program. This in turn exposes the Festival audience and the wider community to creative endeavors that might otherwise not be available to a regional audience.

In 2020 Covid-19 impacted our plans and after thinking we had a solution in moving to smaller venues in Wingham’s streets, we took the safer option to present the festival in a livestream format across two days. This provided the one-off novelty of music home delivered to people’s lounge rooms for free!

So live like a local, save the third weekend in October for the Wingham Akoostik Music Festival and immerse yourself in music, it’s good for the soul! 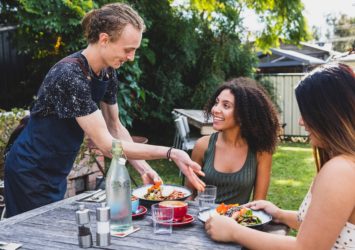 Not just a café but a destination with a dedication to local seasonal produce for breakfast and lunch, 7 days a week.